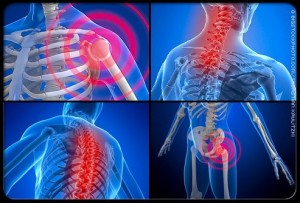 Fibromyalgia is a chronic condition that causes pain, stiffness, and tenderness of muscles, tendons, and joints. It is also characterized by restless sleep, awakening feeling tired, chronic fatigue, anxiety, depression, and disturbances in bowel function. The condition is non-life-threatening and does not cause body damage, deformity, or injury to internal body organs. Fibromyalgia is sometimes referred to as fibromyalgia syndrome and abbreviated FMS. Fibromyalgia was formerly called fibrositis.

The word fibromyalgia comes from the Latin term for fibrous tissue (“fibro”) and the Greek terms for muscle (“myo”) and pain (“algia”).

Fibromyalgia is considered an arthritis-related condition. However, it is not a form of arthritis (a disease of the joints) since it does not cause inflammation in the joints, muscles, or other tissues or damage them but rather a muscle disorder. But fibromyalgia can (like arthritis) cause significant pain and fatigue, and it can similarly interfere with a person’s ability to carry on daily activities.

Fibromyalgia affects predominantly women (over 80% of those affected are women) between the ages of 35 and 55. Less commonly, fibromyalgia can also affect men, children, and the elderly. It can occur independently or can be associated with another disease, such as systemic lupus or rheumatoid arthritis.

The cause of fibromyalgia is not known. Those affected experience pain in response to stimuli that are normally not perceived as painful. Researchers have found elevated levels of a nerve chemical signal, called substance P, and nerve growth factor in the spinal fluid of fibromyalgia patients. Levels of the brain chemical serotonin are also relatively low in patients with fibromyalgia. Studies of pain in fibromyalgia have suggested that the central nervous system (brain) may be somehow super sensitive. Also, patients with fibromyalgia have an impaired non-rapid eye movement, or non-REM, sleep phase (which likely, at least in part, explains the common feature of waking up fatigued and unrefreshed in these patients). The onset of fibromyalgia has been associated with psychological distress, trauma, and infection.

Symptoms and Signs of Fibromyalgia?

Fibromyalgia is not always easy to diagnose because symptoms vary from person to person, many of the symptoms mimic those of other disorders, there are no visible signs of the disorder that a physician can see, and there is no definitive laboratory test for fibromyalgia. The next several slides review some of the more common symptoms of the disorder. Keep in mind each patient with fibromyalgia is unique. Any of the following symptoms can occur intermittently and in different combinations.

Fibromyalgia “tender points” are localized areas of the body that are tender to light touch. Fibromyalgia tender points, or pressure points, are commonly found around the elbows, shoulders, knees, hips, back of the head, and the sides of the breastbone and are typical signs of fibromyalgia.

Tender points are sometimes incorrectly referred to as “trigger points,” which is terminology that is used to describe a situation whereby pressing on certain trigger points can initiate a sequence of symptoms. This is not the case with fibromyalgia tender points, which are chronically a focus of pain and tenderness in the particular area involved.

The universal symptom of fibromyalgia is pain. As mentioned earlier, the pain in fibromyalgia is not caused by tissue inflammation. Instead, these patients seem to have an increased sensitivity to many different sensory stimuli and an unusually low pain threshold. The pain of fibromyalgia is generally widespread, involving both sides of the body. Pain usually affects the neck, buttocks, shoulders, arms, the upper back, and the chest. The body pain of fibromyalgia can be aggravated by noise, weather change, and emotional stress.

Fatigue occurs in 90% of patients. Fatigue may be related to abnormal sleep patterns. Normally, there are several levels of depth of sleep. Getting enough of the deeper levels of sleep may be more important in refreshing a person than the total number of hours of sleep. Patients with fibromyalgia lack the deep, restorative level of sleep, called “non-rapid eye movement” (non-REM) sleep. Consequently, patients with fibromyalgia often awaken in the morning without feeling fully rested, even though they seem to have had an adequate number of hours of sleep time. Some patients awaken with muscle aches or a sensation of muscle fatigue as if they had been “working out” all night!

Mental and/or emotional disturbances occur in over half of people with fibromyalgia. These symptoms include poor concentration, forgetfulness, and memory problems, as well as mood changes, irritability, depression, and anxiety. Since a firm diagnosis of fibromyalgia can be challenging and no confirmatory laboratory tests are available, patients with fibromyalgia are often misdiagnosed as having depression as their primary underlying problem.

Other symptoms include migraine and tension headaches, numbness or tingling of different parts of the body, abdominal pain related to irritable bowel syndrome (“spastic colon”), and irritable bladder, causing painful and frequent urination.

How Is Fibromyalgia Diagnosed?

What Is the Treatment for Fibromyalgia?

Although there is no cure for fibromyalgia, treatment can relieve some of the symptoms. Since symptoms are diverse and vary among patients, treatment programs must be individualized for each patient. Treatment programs are most effective when they combine patient education, stress reduction, regular exercise, and medications. Ultimately, the acupuncturist, and patient may all play an active role in the management of fibromyalgia. Recent studies have verified that the best outcome for each patient results from a combination of approaches that involves the patient in customization of the treatment plan.

Patient education is an important first step in helping patients understand and cope with the diverse symptoms.

It is extremely difficult to measure stress levels in different patients. For some people, spilling milk on the table can represent a significant tragedy. For others, a tank rolling into the living room might represent just another day! Therefore, stress reduction in the treatment of fibromyalgia must be individualized. Qi Gong, Chinese Massage is one specific way to help relieve stress. Qi Gong massage is a medical massage used to treat disease.

The most important therapy for muscle pain is regular low-impact exercise. Keeping muscles conditioned and healthy by exercising three times a week decreases the amount of discomfort. Low-impact aerobic exercises, such as swimming, cycling, walking, and stationary cross-country ski machines, can be effective fibromyalgia treatments. Exercise regimens are most beneficial when performed on an every-other-day basis, in the morning. How exercise benefits fibromyalgia is unknown. Exercise may exert its beneficial effect by promoting a deep level of sleep (non-REM sleep). Sometimes physical therapy can be helpful to optimally guide the exercise plan.

Research hasn’t shown that there are specific foods that all fibromyalgia patients should avoid or add to their diets. But it may still be worthwhile to take a closer look at how foods impact the way you feel. A good way to start identifying the foods that may aggravate your symptoms, experts say, is by keeping a daily food journal. To find out what works for you, try eliminating foods one at a time. As you make changes to your diet, keep in mind that people with fibromyalgia tend to benefit most from taking a variety of approaches to managing their symptoms.

Avoiding alcohol and caffeine before bedtime can help promote a more restful sleep. Foods that lead to comfortable sleep should be favored. While these dietary changes may not apply to everyone, they can be very helpful for some. When patients have accompanying irritable bowel syndrome, the diet should be adjusted to not aggravate the bowels. Likewise, when patients have accompanying interstitial cystitis, foods that irritate the bladder should be avoided.

Local injections of analgesics and/or cortisone medication into the tender point areas can helpful in relieving painful soft tissues, while breaking cycles of pain and muscle spasm. However nonsteroidal anti-inflammatory drugs (NSAIDs), while very helpful in treating other rheumatic conditions, have only a limited value in treating fibromyalgia pain. Narcotic pain relievers are typically avoided in fibromyalgia patients because they have not been shown to be beneficial and have potential adverse side effects, including dependency, when used long term.

With acupuncture, a practitioner inserts one or more dry needles into the skin and underlying tissues at specific points. Gently twisting or otherwise manipulating the needles causes a measurable release of endorphins into the bloodstream. Endorphins are the body’s natural opioids. In addition, energy blocks are removed. Removing them restores the flow of energy along the meridians, which are specific energy channels. Studies show that acupuncture may alter brain chemistry. It appears to do this by changing the release of neurotransmitters. These neurotransmitters stimulate or inhibit nerve impulses in the brain that relay information about external stimuli and sensations such as pain. In this way, the patient’s pain tolerance is increased. One acupuncture treatment in some patients may last weeks to help alleviate chronic pain.

Massage can reduce muscle tension and ease pain in the muscles and soft tissue. It can also improve circulation and range of motion and boost production of natural painkillers. Some studies suggest it can improve your mood. And it may help people with fibromyalgia sleep better, too. Formal studies of the effects of massage on fibromyalgia symptoms are few and results are mixed. However, researchers at the University of Miami’s Touch Research Institute report that just 20 minutes of moderate-pressure massage can lessen the flow of chemicals associated with pain and stress while increasing production of serotonin. The result is a better night’s sleep. That can help combat fatigue and the inability to concentrate known as “fibro fog.”

What Is the Outlook for Patients With Fibromyalgia?

The outlook for patients with fibromyalgia is generally quite good. It is important to note that fibromyalgia is not an organ-threatening illness. Those patients with an approach to treatment that involves optimal understanding of the condition, as well as sleep improvement, stress reduction, and exercise, tend to do best.