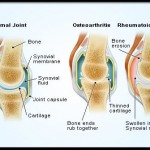 Primary OA is related to aging. Repetitive use of the joints results in degeneration of the cartilage, which leads to pain and lessened joint motility. Women and men are affected equally, though over the age of 55, women are more affected than men.

Secondary OA is caused by another disease or condition, such as obesity, trauma, surgery, congenital abnormalities, gout, diabetes, and other hormone disorders.

The most common symptom of OA is pain in the affected joint or joints after repetitive use. Deep, aching joint pain which improves with rest is common. Other symptoms include stiffness in the morning and after exercise, aching during weather changes, crackling noise with movement, (known as bony crepitus), limited range of motion, and bone deformities due to bone spurs. Joints can be tender, but are seldom warm, and rarely red.

Diagnostic procedures for OA include a physical exam to confirm the symptoms and to rule out an inflammatory joint disorder. X-rays may be helpful in confirming a diagnosis of OA, but in the early stages, x-rays may be normal. X-rays may show a loss of joint cartilage, narrowing of the joint space between adjacent bones, and bone spur formation.

Treatment of OA is aimed at reducing joint pain and inflammation, and maintaining or improving mobility. For individuals with little or no pain, no treatment may be needed. Some individuals will benefit from rest, exercise, weight reduction, physical and occupational therapy, and mechanical support devices. Massage, moist heat, and paraffin dips may also be helpful.

Pain-relieving creams, such as capsaicin, (Arthricare, Zostrix), salycin, (Aspercreme), methyl salicylate, (Bengay, Icy Hot), and menthol, (Flexall), are applied to the skin over the joints and can provide some relief from arthritis pain.

Other medications used to treat OA include:

-Steroids. These medications are used to reduce inflammation and pain. They may be injected directly into the joint.

-Supplements. Over-the-counter supplements like glucosamine and chondroitin sulfate may be helpful. There is some evidence that these supplements are helpful in controlling pain, although they do not appear to grow new cartilage.

-Artificial joint fluid (Synvisc, Hyalgan). These medications can be injected into the knee. They may provide temporary relief pain for up to six months.

Surgical options are available for individuals with severe disability or uncontrollable pain. Arthroplasty is the partial or total replacement of the deteriorated part of the joint with a prosthetic appliance. Arthrodesis is the surgical fusion of bones, primarily used in the spine (laminectomy). Osteopathy is the scraping of deteriorated bone from the affected joint. Osteotomy is the change in alignment of bone to relieve stress by cutting the bone.

Complications of OA include irreversible joint changes and node formation, subjugation of the joint, decreased range of motion, joint contractile, pain, and loss of independence in activities of daily living. Complications can occur as a result of medications as well. Long-term use of NSAIDs can cause stomach problems, such as ulcers and bleeding. In April 2005, the FDA asked drug manufacturers of NSAIDs to include a warning label on their product that alerts users of an increased risk for cardiovascular events and gastrointestinal bleeding.

There have been numerous reports of heart attacks and stroke which have prompted the FDA to re-evaluate the risks and benefits of COX-2s. Vioxx and Bextra have been withdrawn from the market in the U.S. Celebrex is still available, but is labeled with strong warnings.

Acupuncture, however, provides a safe and effective treatment option for individuals suffering with arthritis.

According to a study in the November, 2006 edition of Arthritis & Rheumatism, a German study showed acupuncture may ease hip & joint pain from osteoarthritis.

“Acupuncture should be considered as a treatment option for patients with knee or hip-associated chronic pain,” write the researchers.

The research team noted “marked clinical improvement” in pain and quality of life in patients with hip & knee osteoarthritis after 3 months of acupuncture treatment.

A 2004 report also provided proof that acupuncture is effective for those suffering with arthritis. “Treatment with acupuncture needles significantly reduced pain and eased movement for patients with arthritic knees who were taking pain medicine, according to the largest and most rigorous study to date of the ancient treatment.

The new results also mark the most significant proof yet that acupuncture, first practiced in China more than 2,000 years ago, is a useful and safe treatment for some illnesses. The study, sponsored by the National Institutes of Health and published in the Annals of Internal Medicine, is part of the government’s effort to test alternative medical therapies using scientific methods.

“We now have a new adjunct therapy for millions of patients with degenerative arthritis,” said Dr. Stephen E. Straus, director of the National Center for Complementary and Alternative Medicine, which helped fund the study.”

Rheumatoid arthritis is an autoimmune disease in which the body’s immune system attacks itself. The pattern of joints affected is usually symmetrical, involves the hands and other joints and is worse in the morning. Rheumatoid arthritis is also a systemic disease, involving other body organs, whereas osteoarthritis is limited to the joints. Over time, both forms of arthritis can be crippling.